Earth to Earth….dust to dust.

It’s funny how the mind works some days, isn’t it? For instance, I had occasion to spend a couple of hours yesterday in Dromore, County Tyrone. I have been there many times but I’m always traveling through and I’ve just never taken the time to pause. But yesterday I got out of the car and had a wee wander. I highly recommend getting out of the car – it’s amazing what you find!

I came across this scene:-

It turns out that there was a Cistercian Abbey here that was destroyed by fire in 1690 and these are the remains of a protestant church built on the same site in 1694. Good old Wikipedia has this to say about Dromore:-

In 1838 Dromore, in the Parish and Barony of Omagh, was described as a poor village in hilly and bleak country which stretched far around, yet the arable lands were for the most part good. The population of the village was 480 in 1831, and 551 in 1841.

The town was originally built in 1757 when the then Lord of the manor, William Hamilton, of Aughlish House gave a grant of the townland of Mullinacross, now called Dromore, to two families – Stewart and Humphreys. The village at that time consisted of only four houses. The original name of the townland is derived from an ancient stone cross which formerly stood on the top of the hill overlooking the town, and near to where the Cistercian Abbey was located. This abbey which was destroyed by a fire in 1690 is said to have been built on the site of a nunnery founded by Saint Patrick for Saint Cettumbria, the first Irish female who received the veil from his hands. In the village, still to be seen, are the ivy-clad remains of a Protestant church built in 1694.

During the Irish Rebellion of 1798, when Lord Blayney came to Tyrone, as Dromore was principally inhabited by rebels, he set it on fire and burned some of the houses, but owing to the exertions of Captain Charles Muirhead, Lieutenant James Alexander and the Rev. Benjamin Marshall the balance of the town was saved from destruction.

In the area around Dromore are to be found a number of ancient earthen forts. At Dullaghan about four miles to the northwest is a Druid’s Altar – a small roofless chamber tomb. A tannery was known to have existed in the village.

In the Dromore Parish at least nine locations of Mass Rocks are known. During the times of the Penal Laws certain “Mass Gardens” were located in the district where the local parishioners met in seclusion to celebrate Mass. It is said that Lord Belmore, who owned considerable property around Dromore, was so impressed with the devotion of the congregation at one of these gatherings, which he came across one day by chance, that he made available a piece of ground for the erection of a church. This is where the Catholic Church of Dromore now stands.

Now… I quote that bit to save you the bother of taking the link yourself but feel free to go there after you’ve added your thoughts here!

As I walked through this site, with its derelict church and neglected graves, I began to think about the marks we leave on this planet during our time. All the fine people buried here were once rich enough, and religious enough, to warrant a final resting place on this hallowed ground but now? The graves are overgrown, neglected and the painstakingly created script on the stones is mostly illegible:-

I’ve always known that our time here is finite and the allotted span of our descendants means that, in a relatively short time, we’re forgotten. But I’m not at all convinced that we, collectively as a society, should allow burial places to fall into such disrepair. What does it say about us?

As a quiet Tyrone rain drizzled into the gathering gloom of this burial ground with it’s lush untended grass, hawthorn covered headstones and tumbled church walls, I felt the approach of time and the inevitability of the total anonymity it provides.

But, atmospheric as it was, I would have wished that the ground was tended more than it is. How much does respect for our ancestors cost? We’re spending millions of lottery fund money on less worthy projects. Why not protect somewhere like this before we lose it? It’s part of our heritage, part of who we are.

If you’re passing I suggest you stop. There is nothing like touching your own mortality to make the time we have on this wee island taste a bit sweeter. 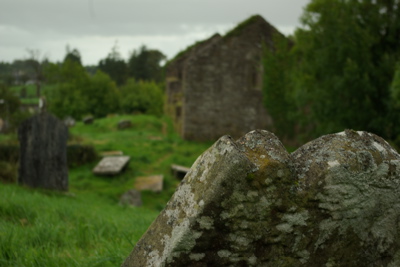 This entry was posted on Friday, September 21st, 2007 at 9:26 am and is filed under Culture, Graveyards, History, Religion. You can follow any responses to this entry through the RSS 2.0 feed. You can leave a response, or trackback from your own site.

One Response to Earth to Earth….dust to dust.